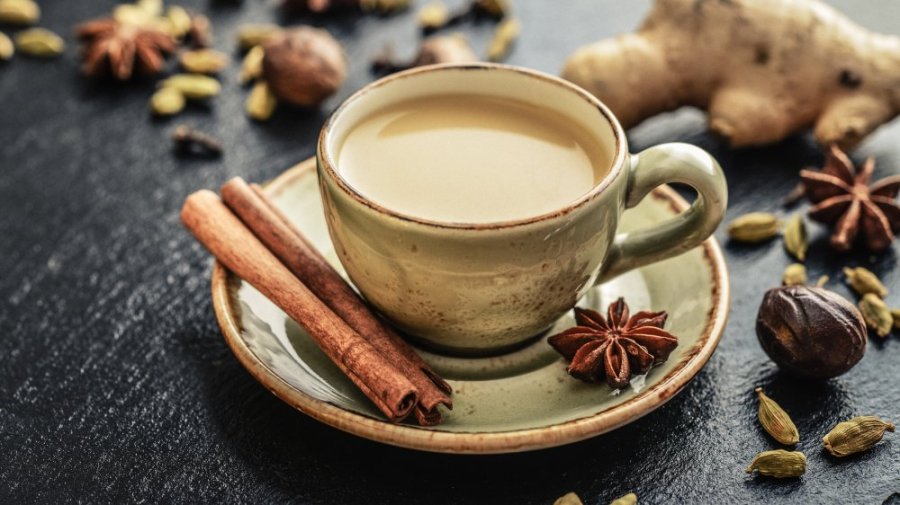 Across Asia, chai simply means ‘tea’. But in Western countries chai describes a black tea flavoured with a combination of aromatic spices such as cardamom, cinnamon, cloves, ginger, black pepper and vanilla. In villages of the Indian sub-continent, this fragrant concoction is a rich milky-sweet infusion made by boiling full-cream milk with black tea leaves (assam or oolong) and local spices. But a good chai tea doesn’t need all that indulgent milky sweetness to taste good, or be good for you.

Spiced teas have been popular for generations of people due to the remarkable digestive properties of the tea and the spices. Whether served as a simple black tea infusion, or traditionally with milk and honey, chai tea offers warm and complex flavours with soothing effects on the digestive system and enough caffeine for a mild stimulant.

Black teas infused with cardamom, cinnamon and cloves are popular folk remedies in the treatment of coughs, colds and bronchitis due to a clearing effect on the mucus membranes of the airways. Cardamom is said to combat indigestion, acid regurgitation and flatulence. Cinnamon and cloves can relieve with nausea, vomiting, flatulence and diarrhoea, while ginger is a widely-accepted natural remedy for upset stomach and nausea. Black pepper is a recognised digestive stimulant, easing flatulence and constipation, and may improve blood circulation too.

Scientific research is discovering how the naturally-occurring polyphenols in black tea and cinnamon spice can have a positive effect on our gut microbiome. Polyphenols can exert a prebiotic effect by stimulating the growth and activity of beneficial bacteria living in our gut, which has a positive effect on digestion, metabolism, immune function and brain health.

Beware the loose-leaf or powdered versions sold in trendy cafes; their tea might be tasty but you don’t know what you’re getting. The Chai Tea available in Australian supermarkets is generally the organic form sold in unbleached tea bags. Marked ‘organic certified’, these teas are free from potentially harmful pesticides, fungicides and artificial chemical fertilisers. The basic spice mix of ginger, cinnamon, cardamom and cloves – blended in varying amounts depending on the manufacturer – will sometimes have black pepper and vanilla bean added too.

This site uses Akismet to reduce spam. Learn how your comment data is processed.